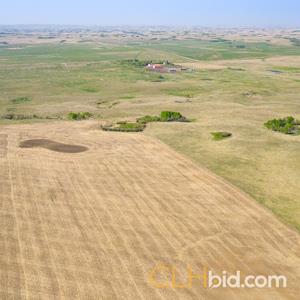 Swedish designed and Canadian built, the main ranch is over 100 years in the making, having been homesteaded in 1912. The Hjalte Ranch is a feel-good Western Canadian Heritage story. Homesteaded over a century ago by Swedish immigrants, the ranch remains to this day owned and operated by 3rd and 4th generation family members. The history of the Hjalte Ranch is a story of giving back, with each generation working on upgrading and adding to the ranch itself. 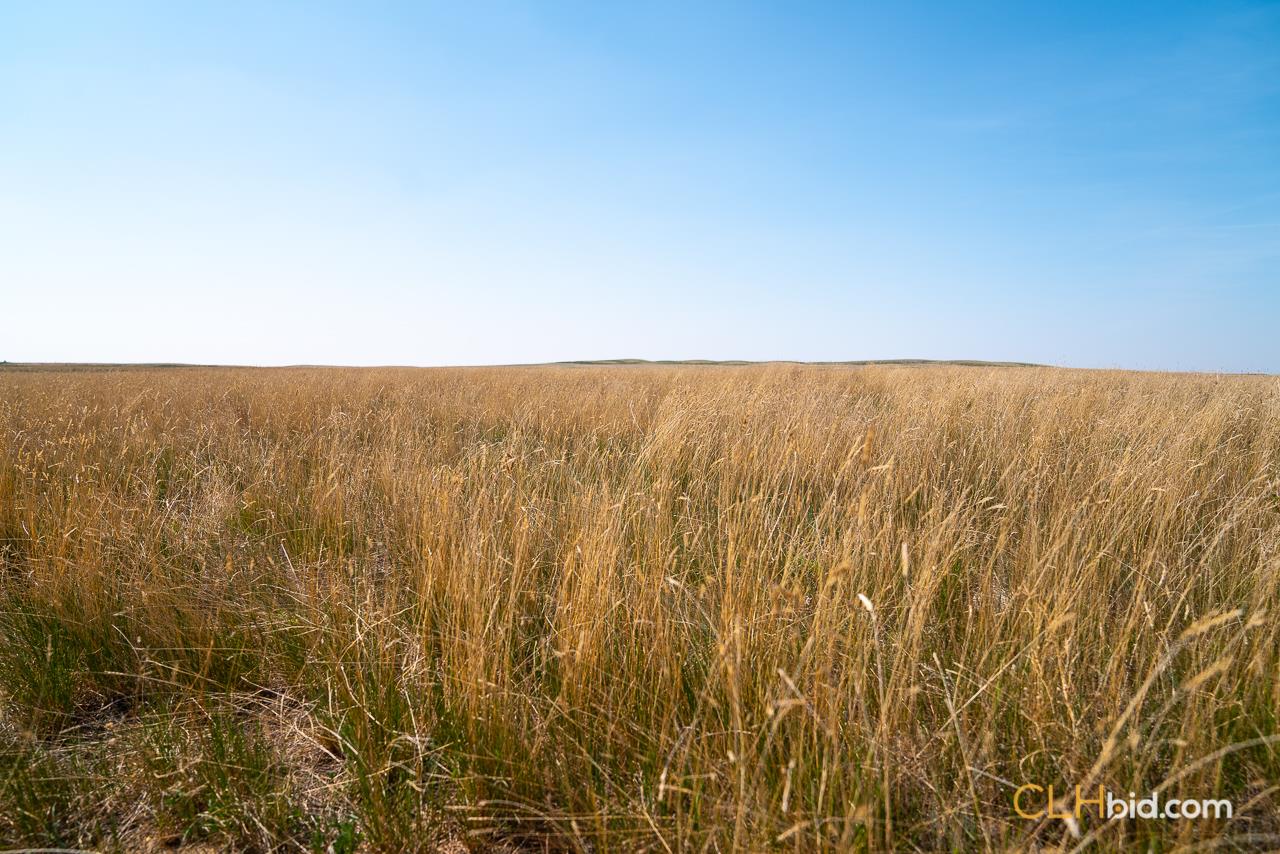 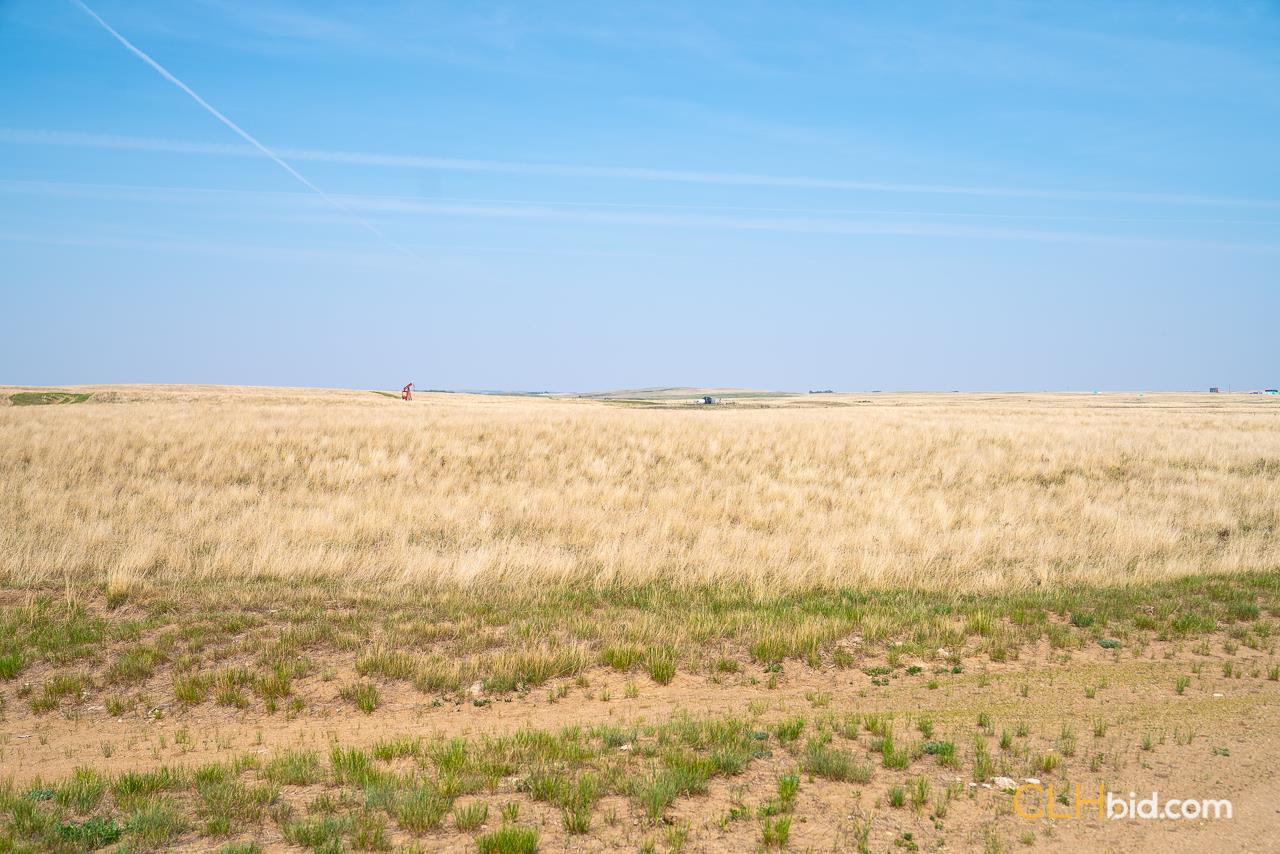 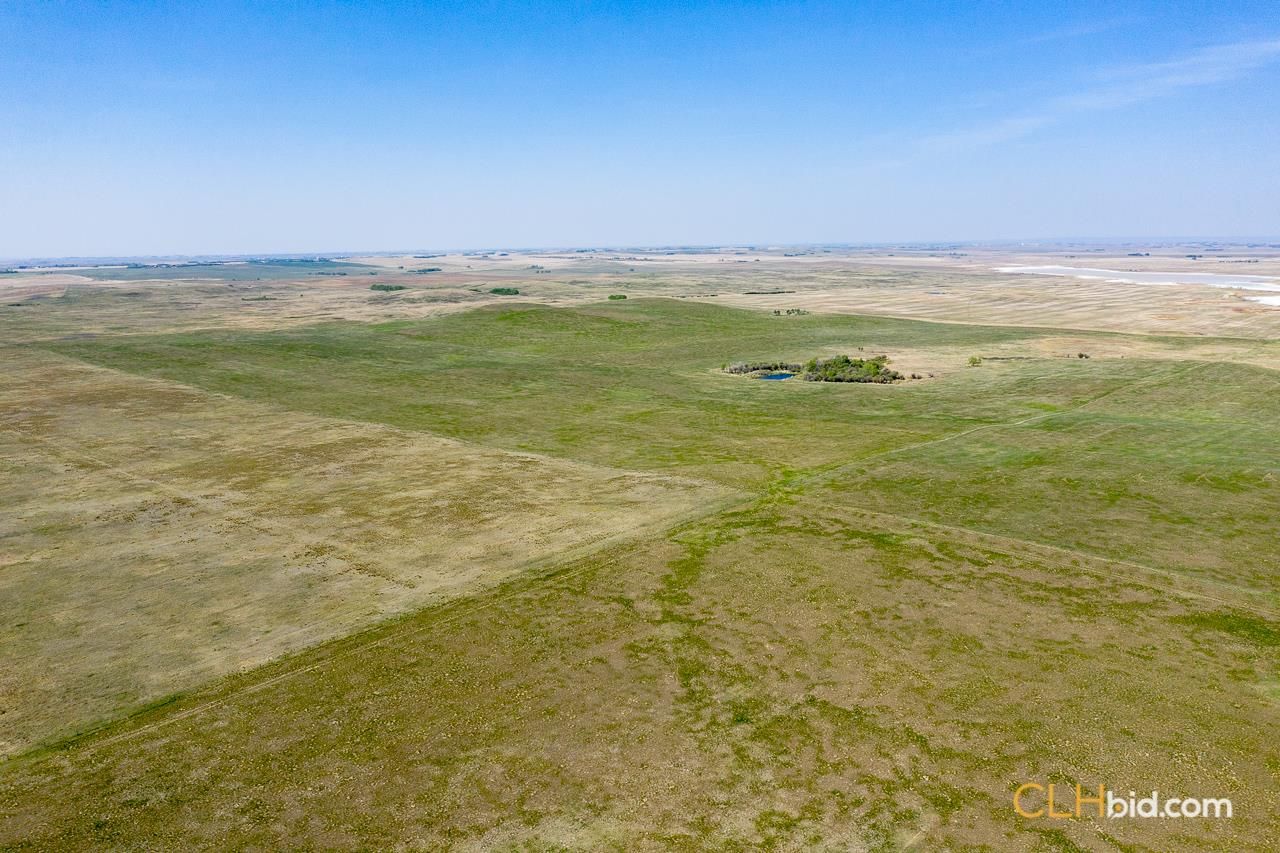 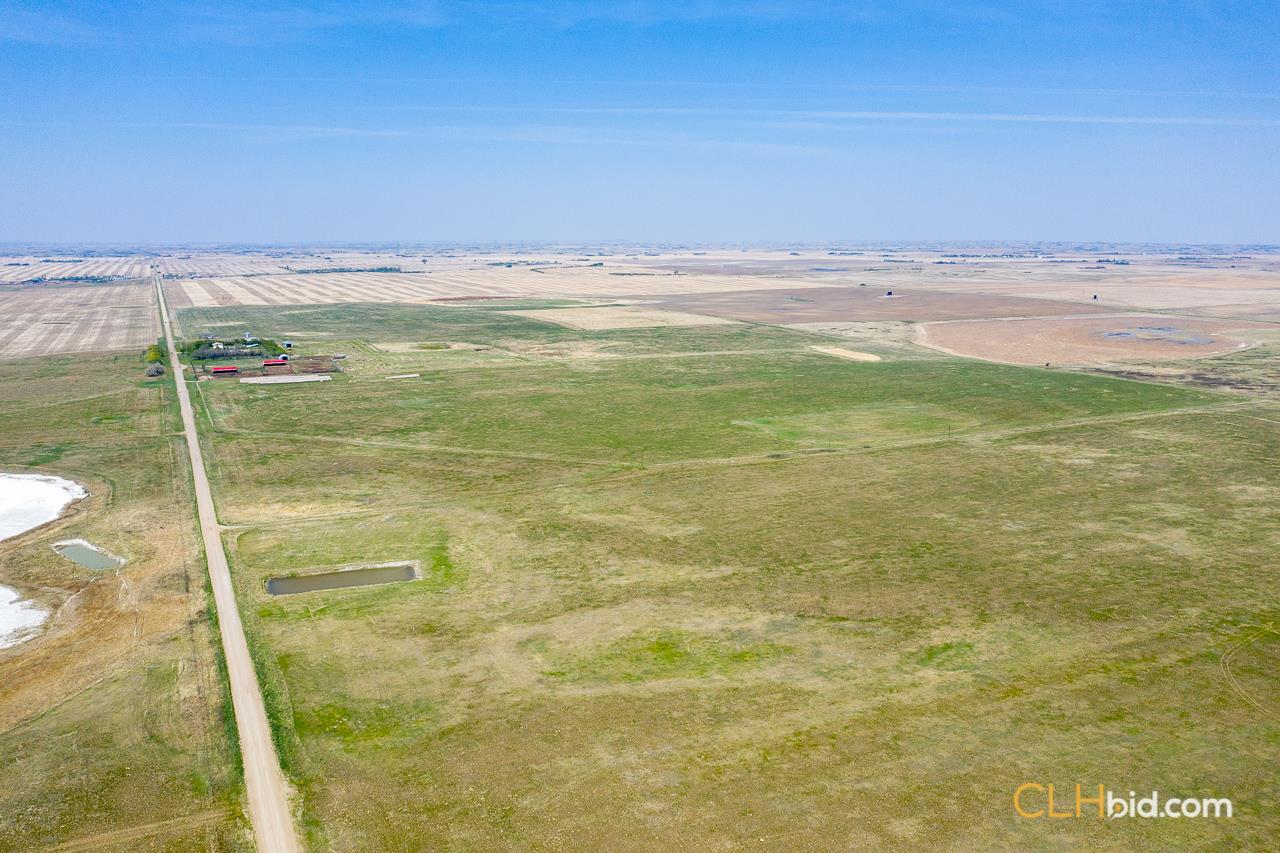 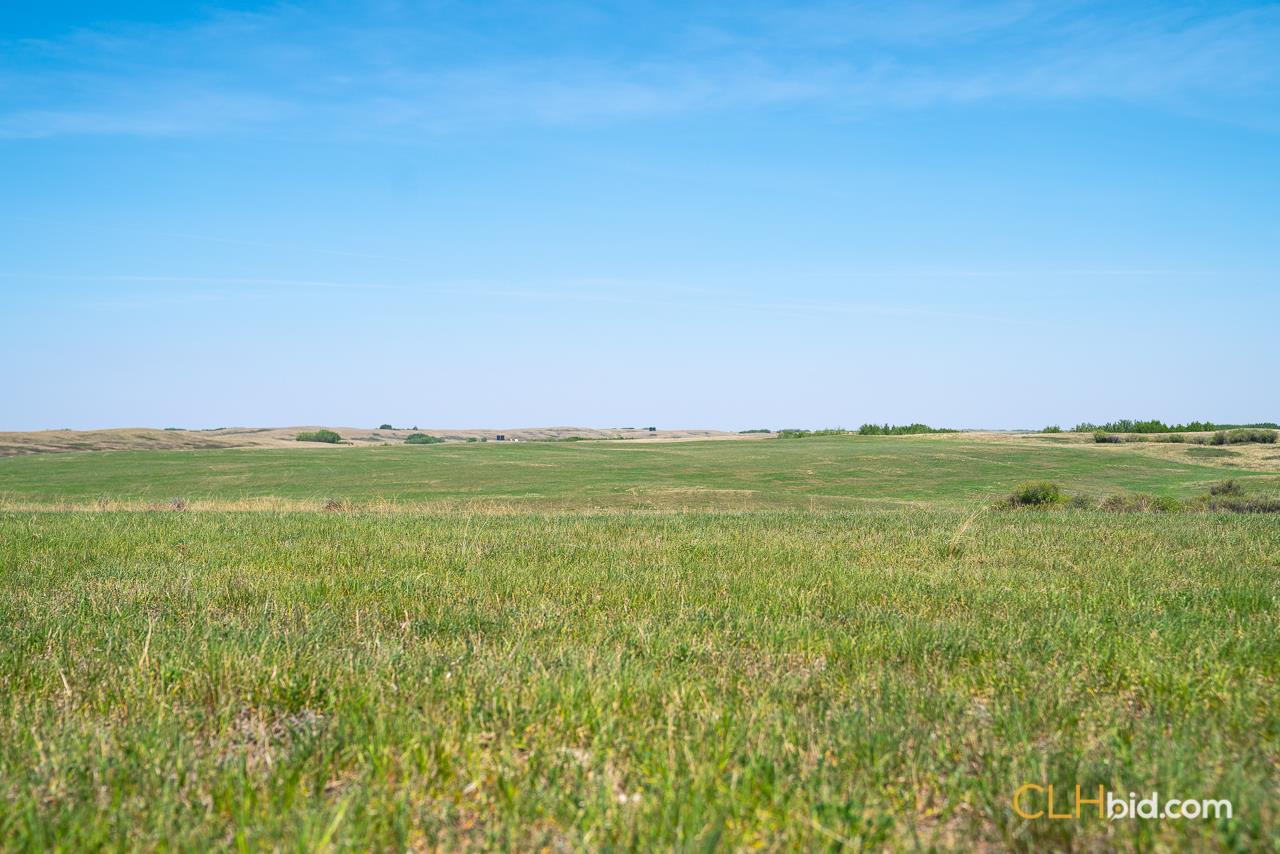 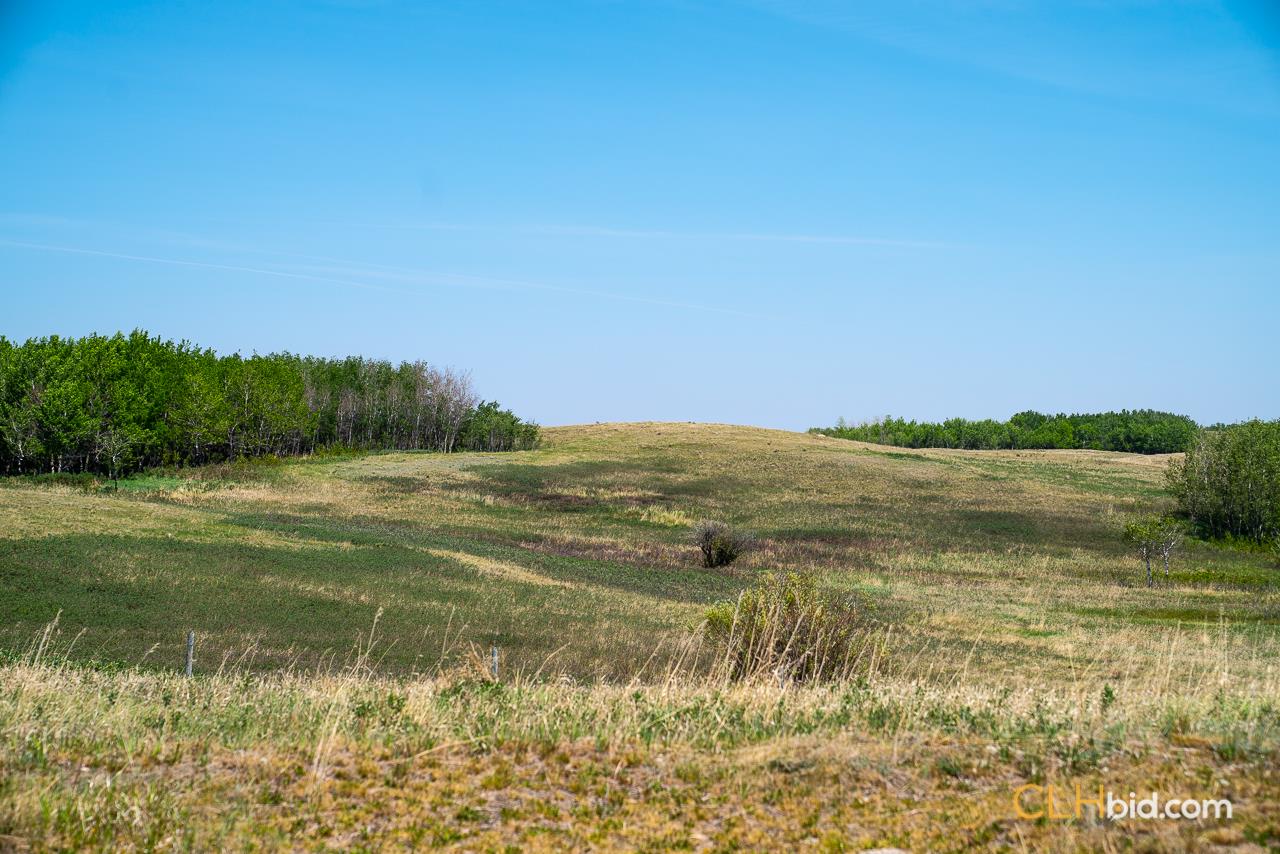 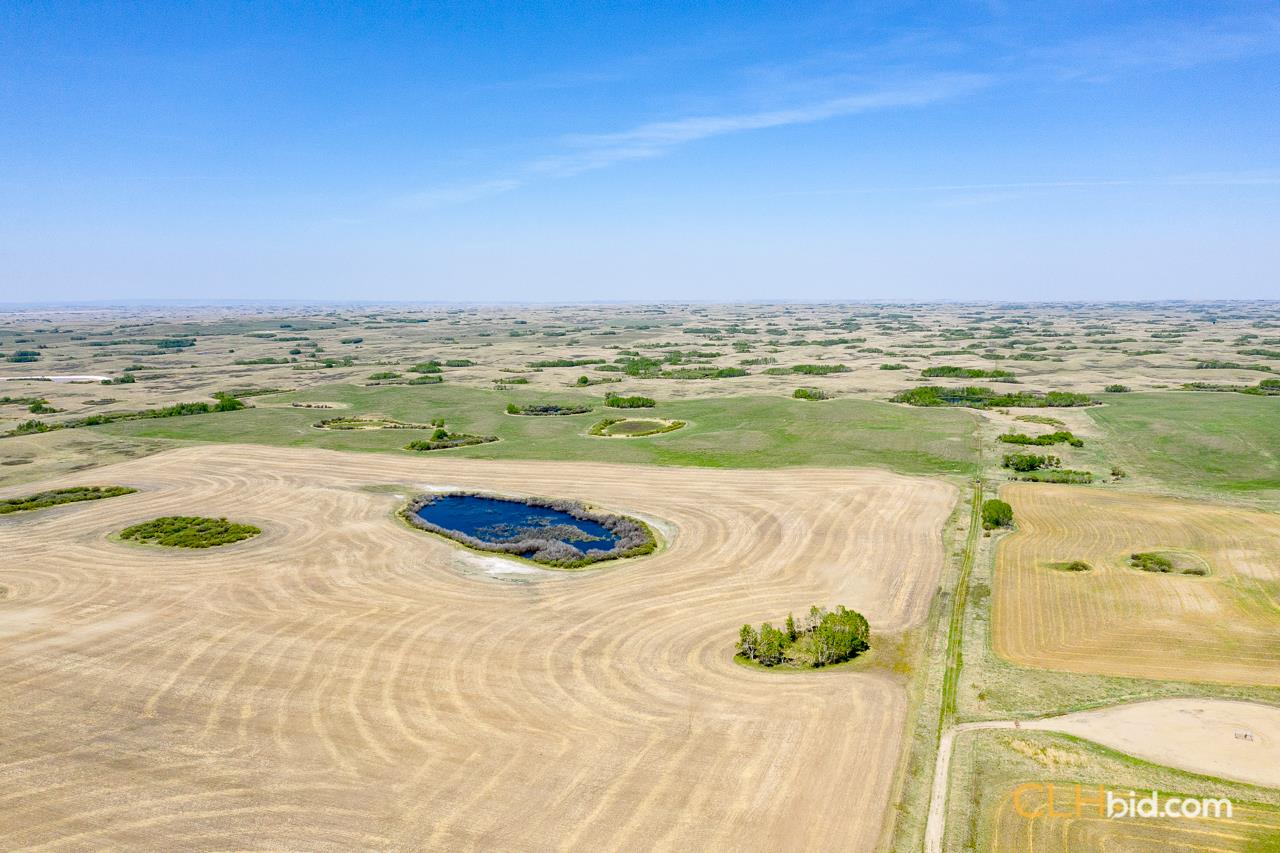 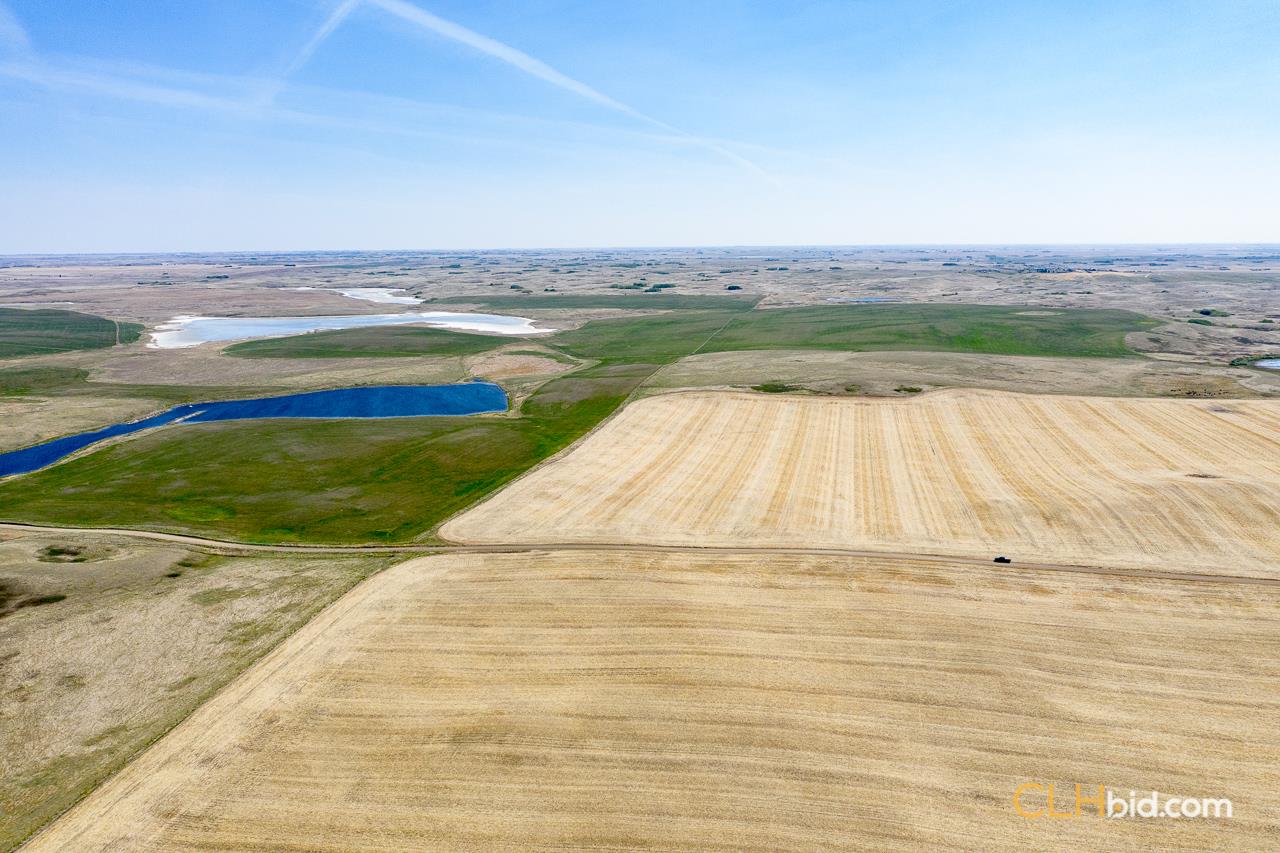 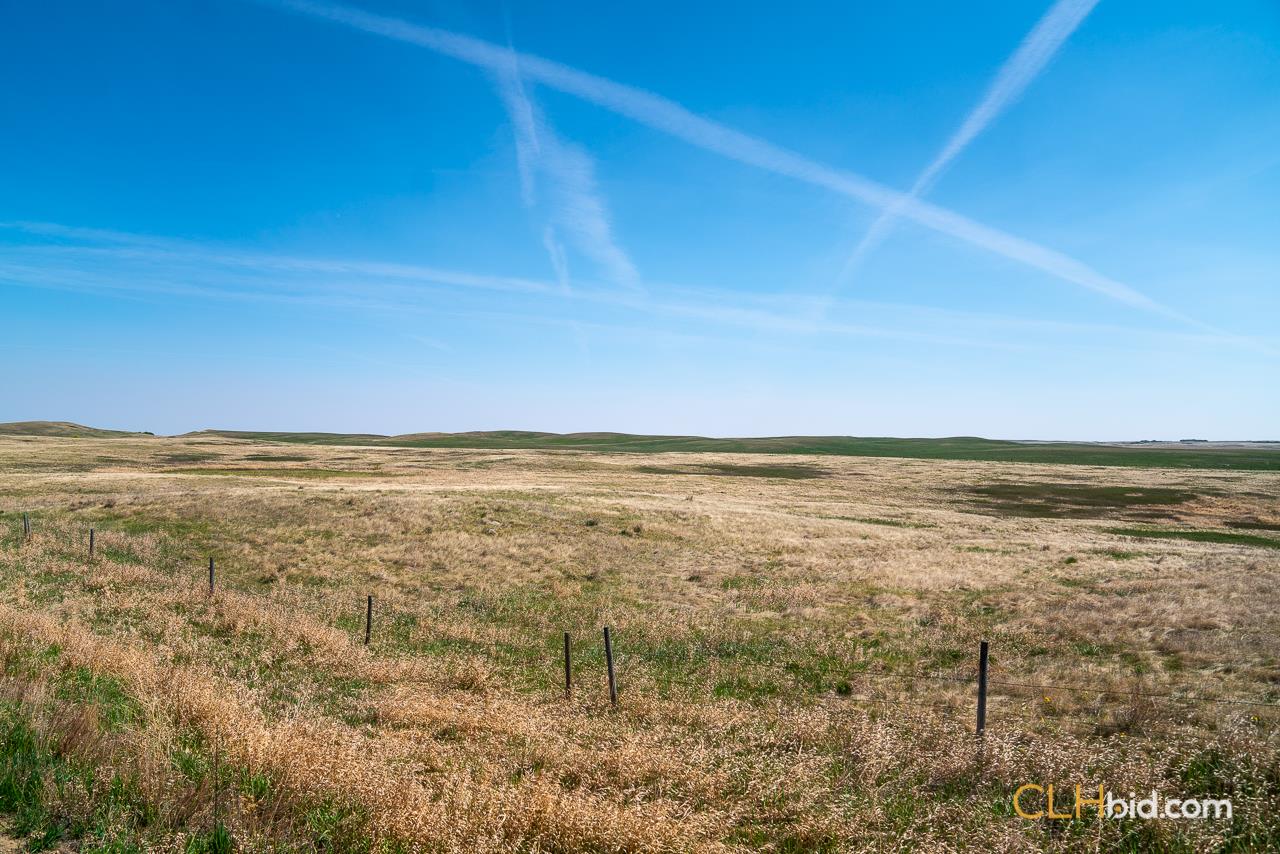 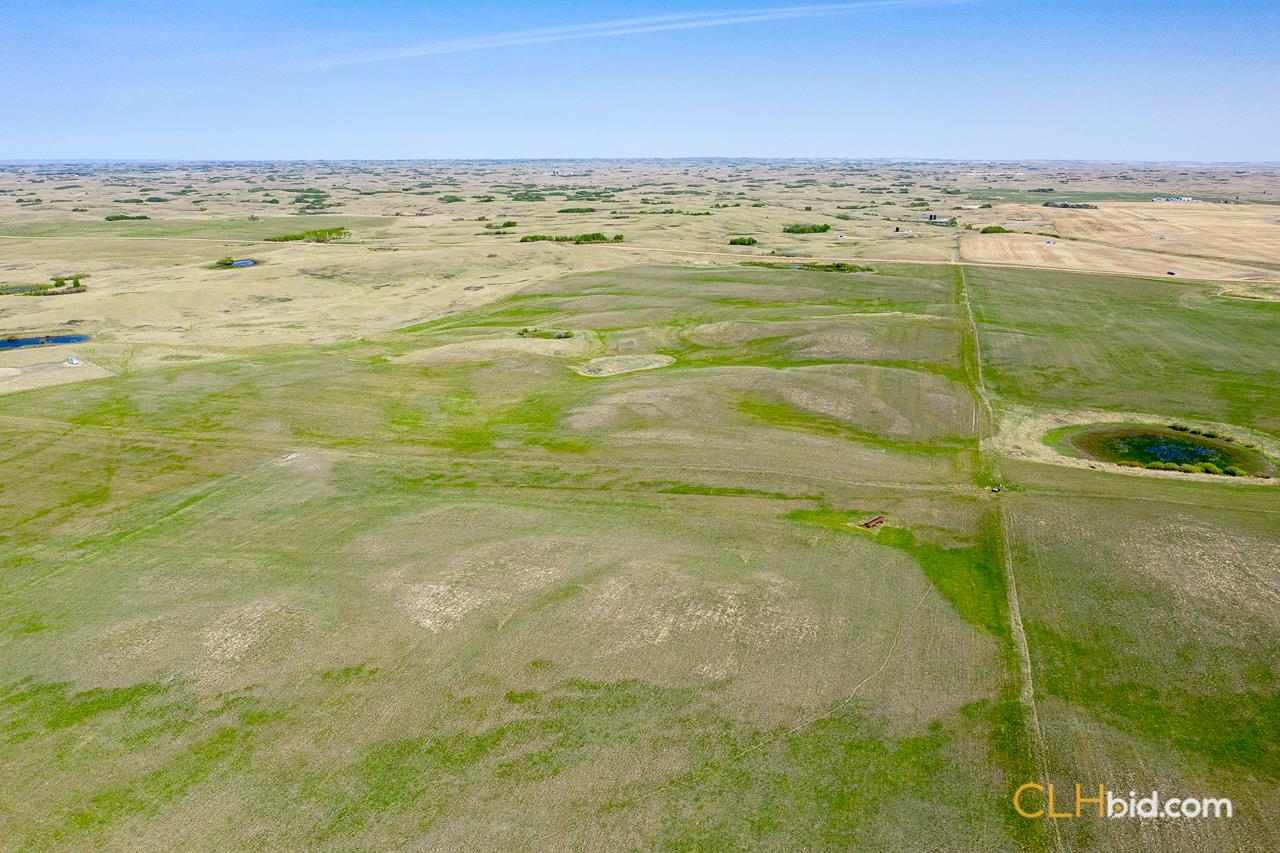 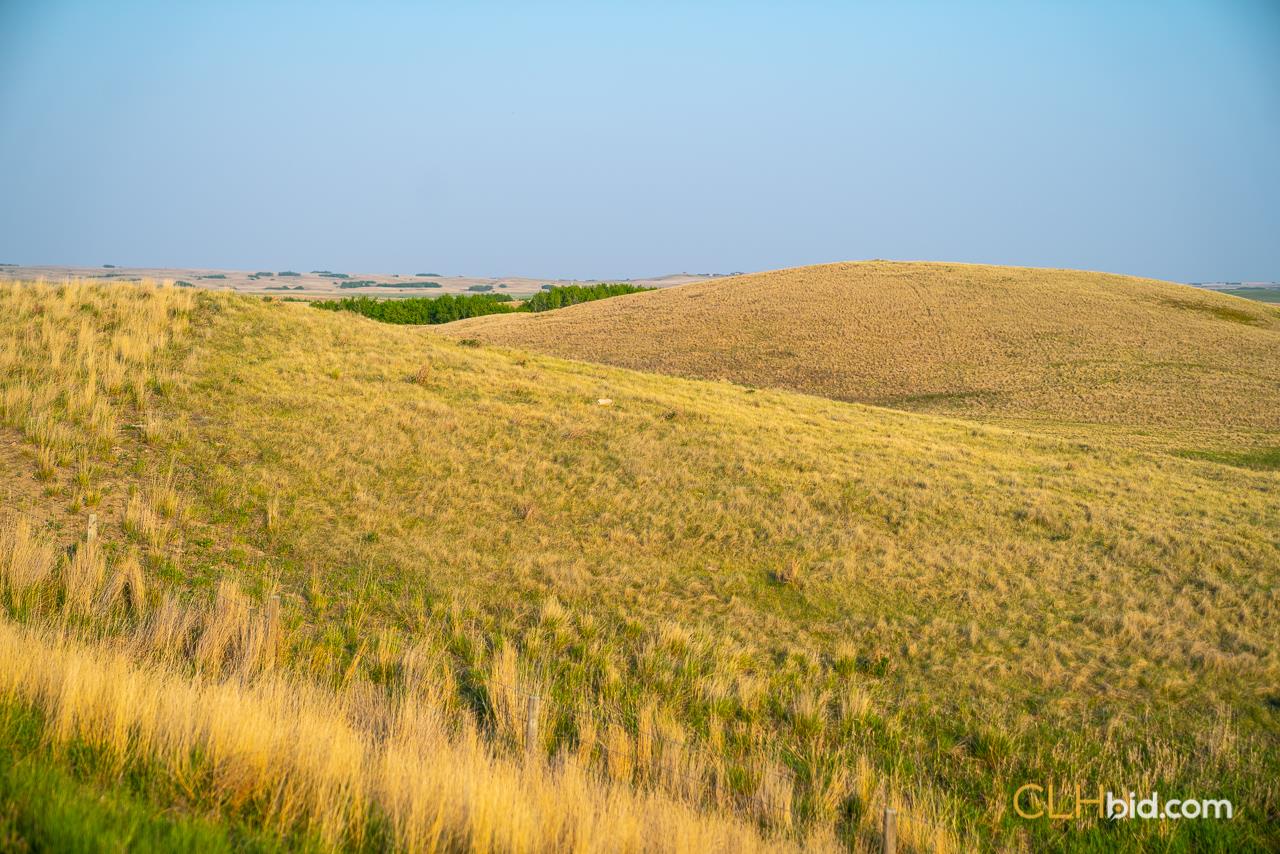 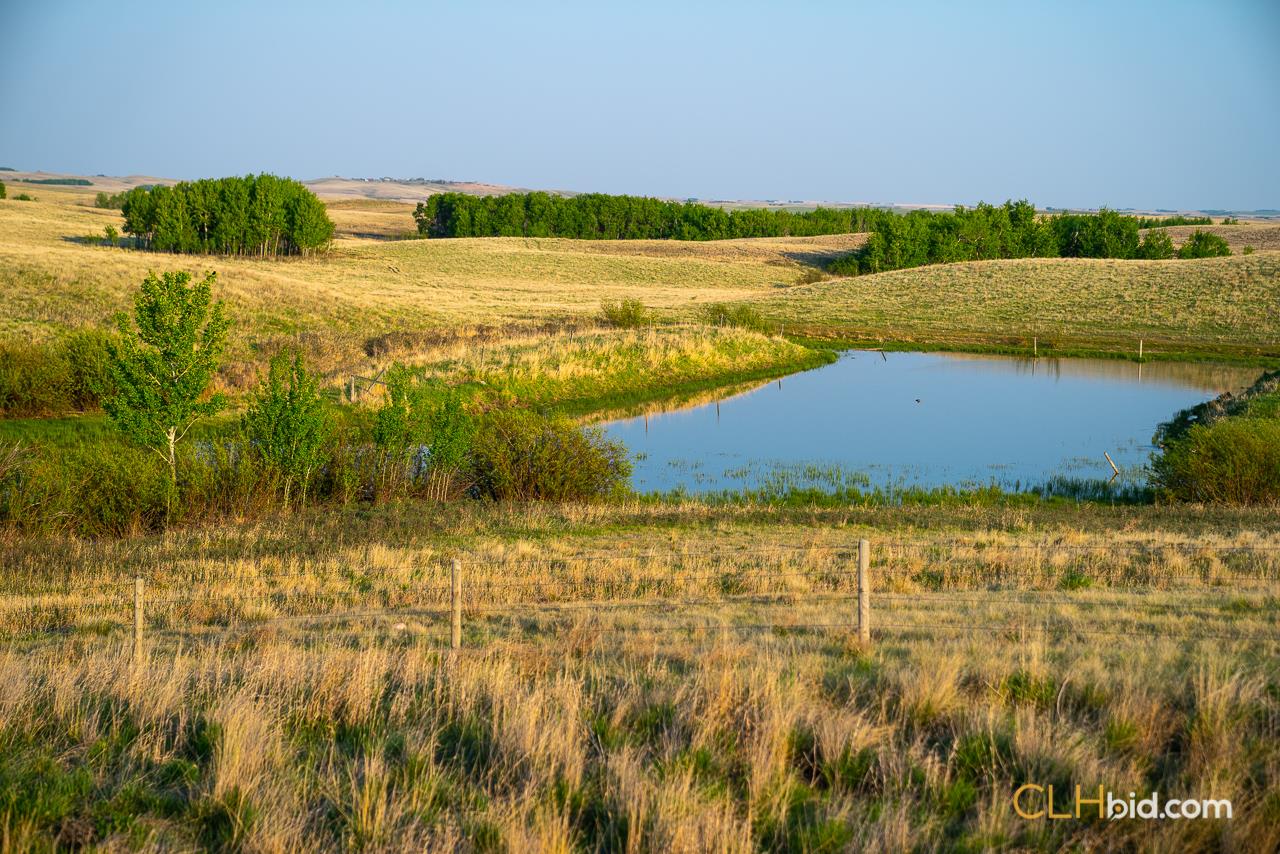 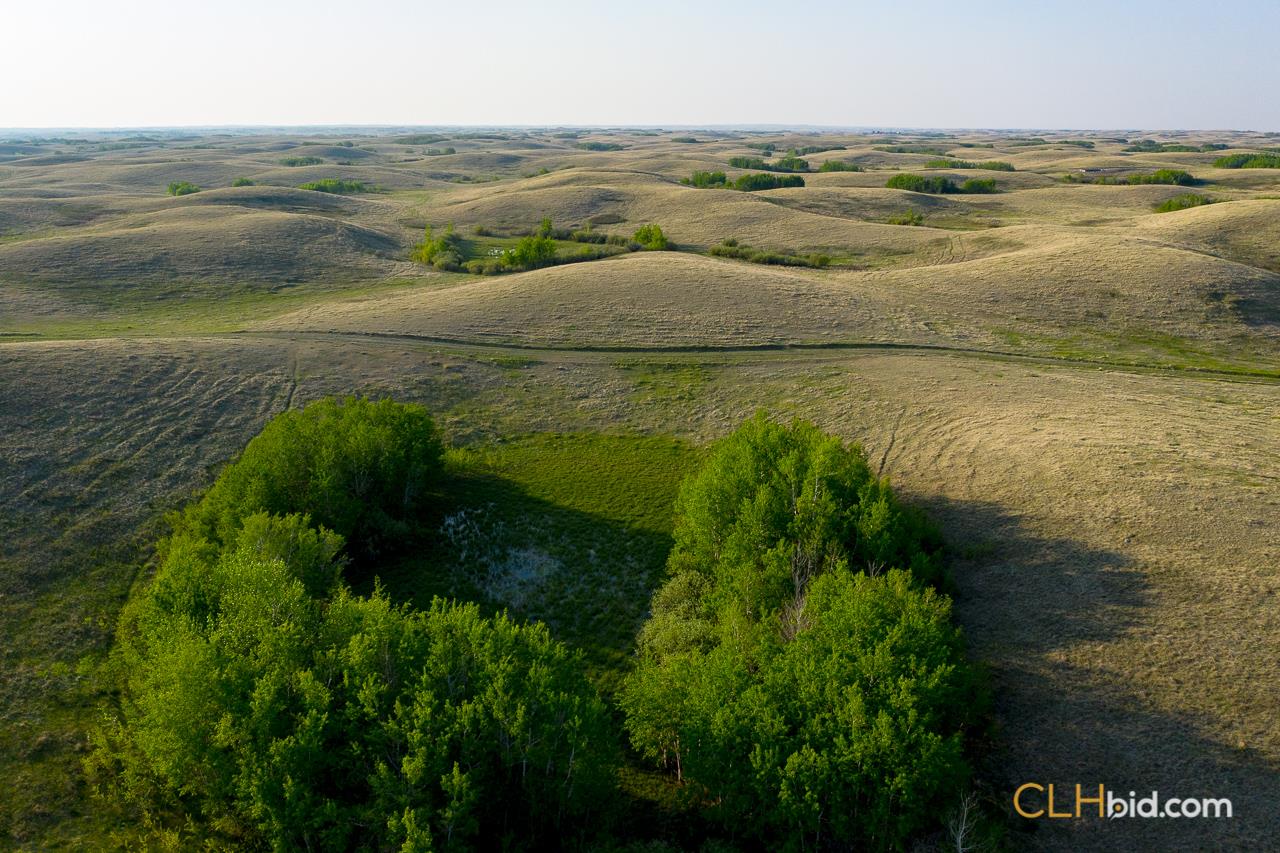 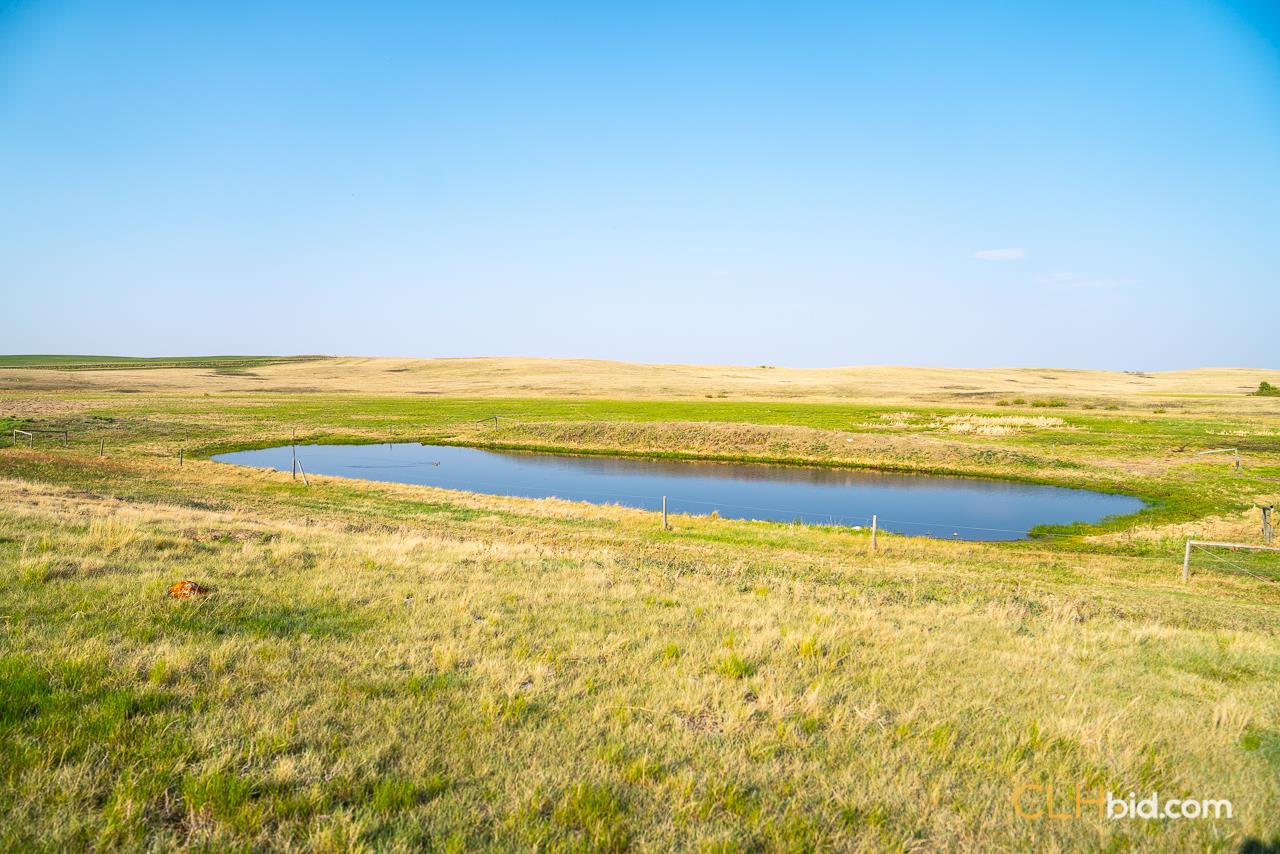 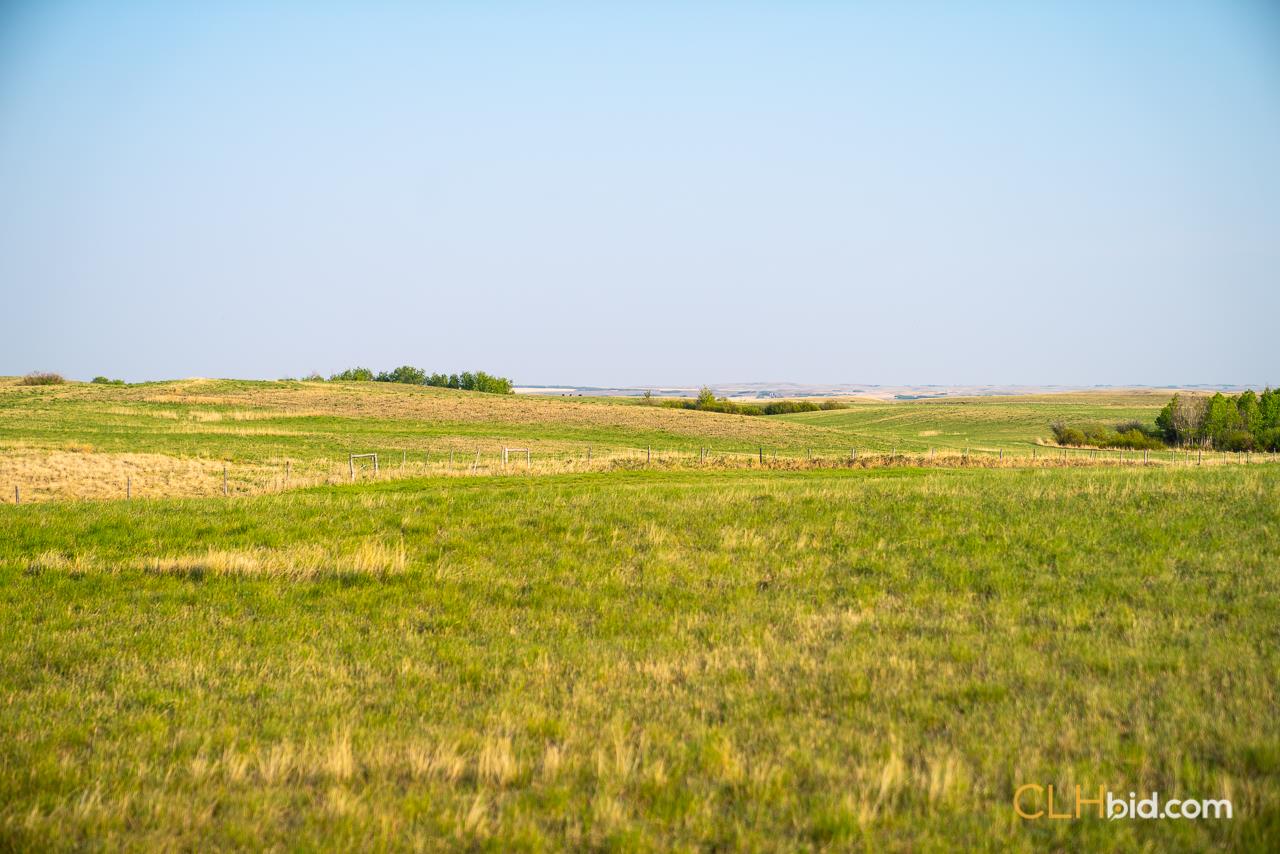 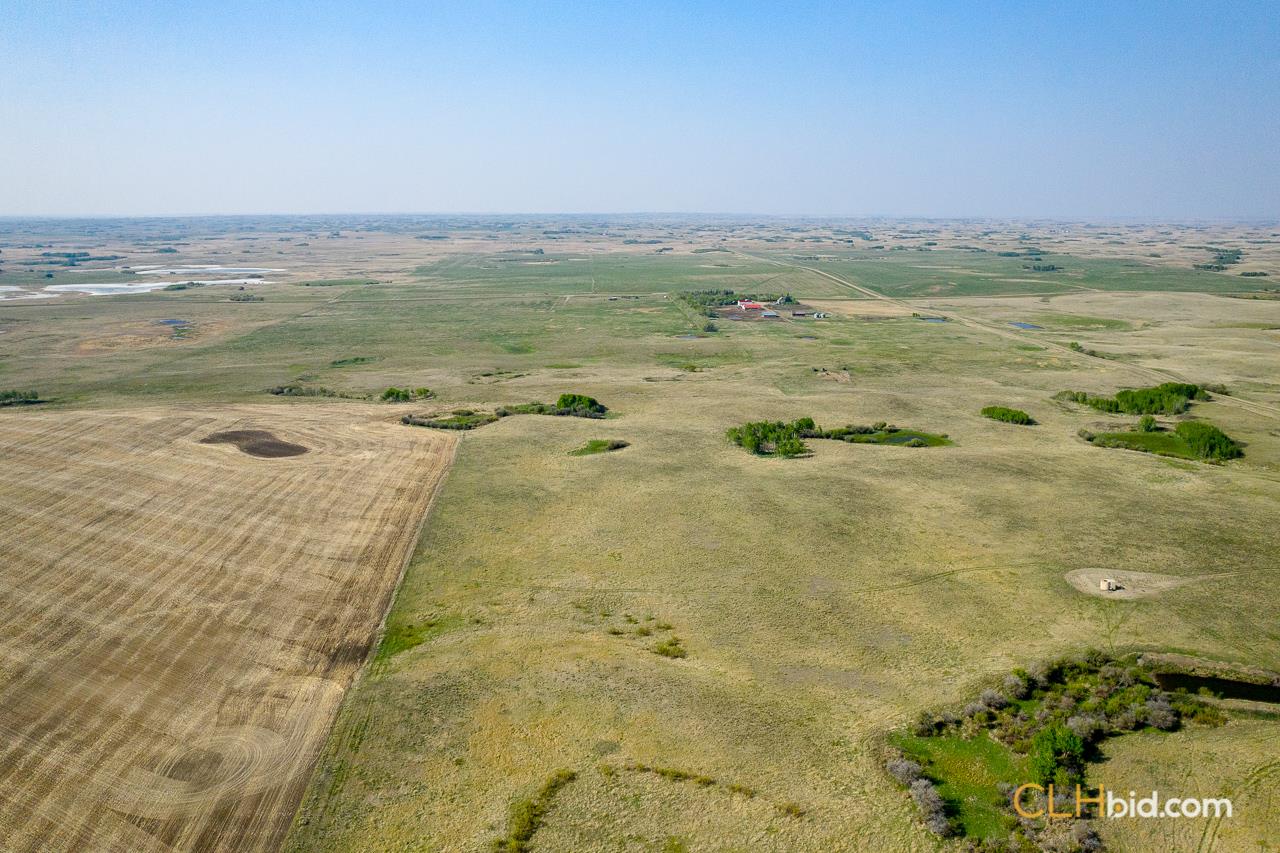 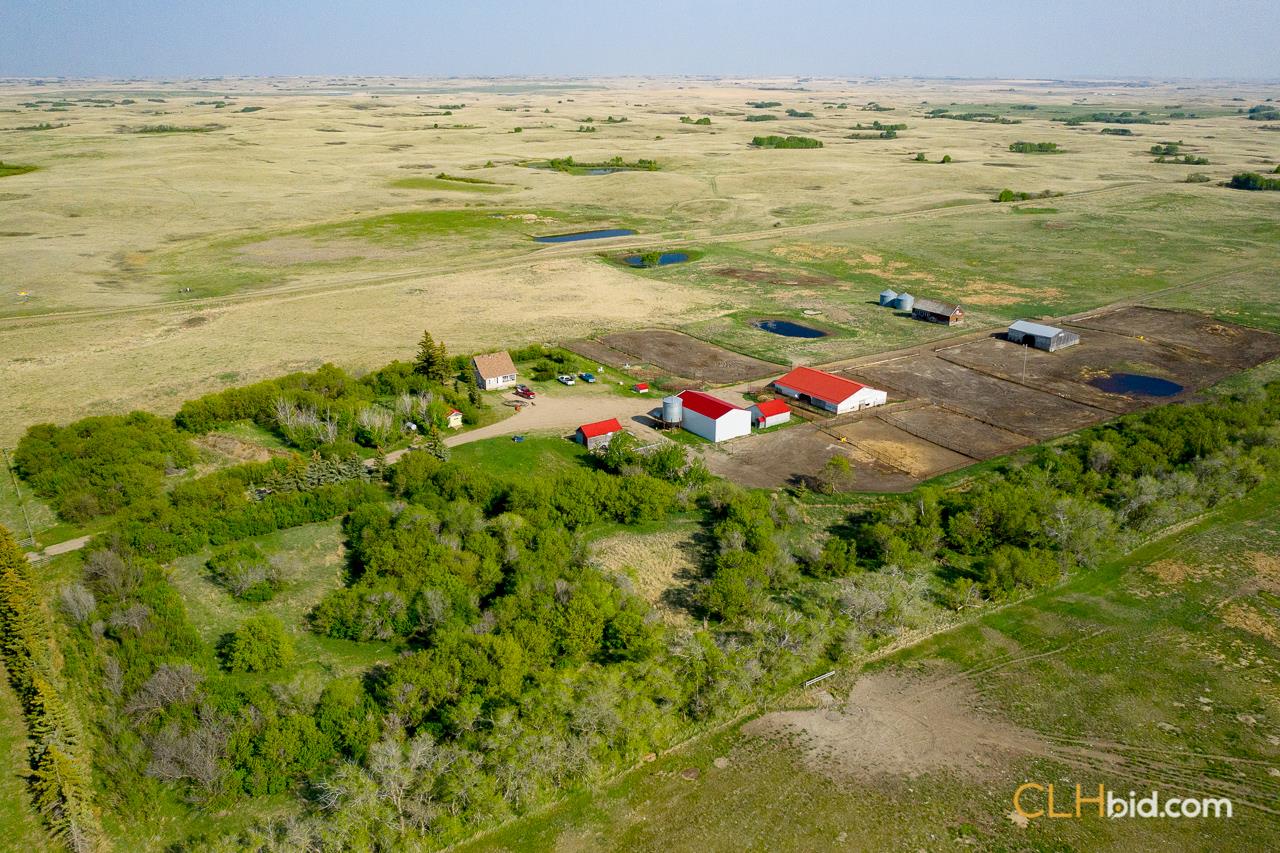 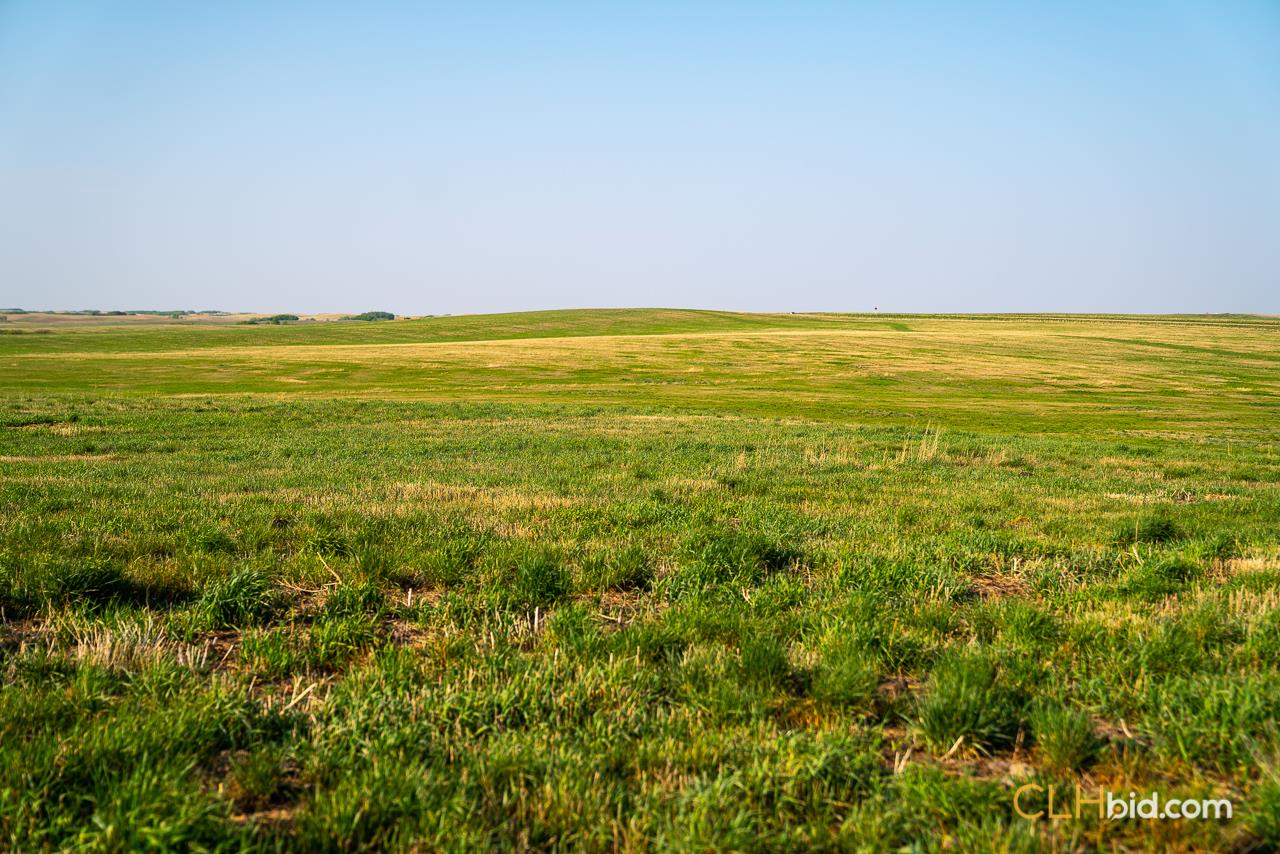 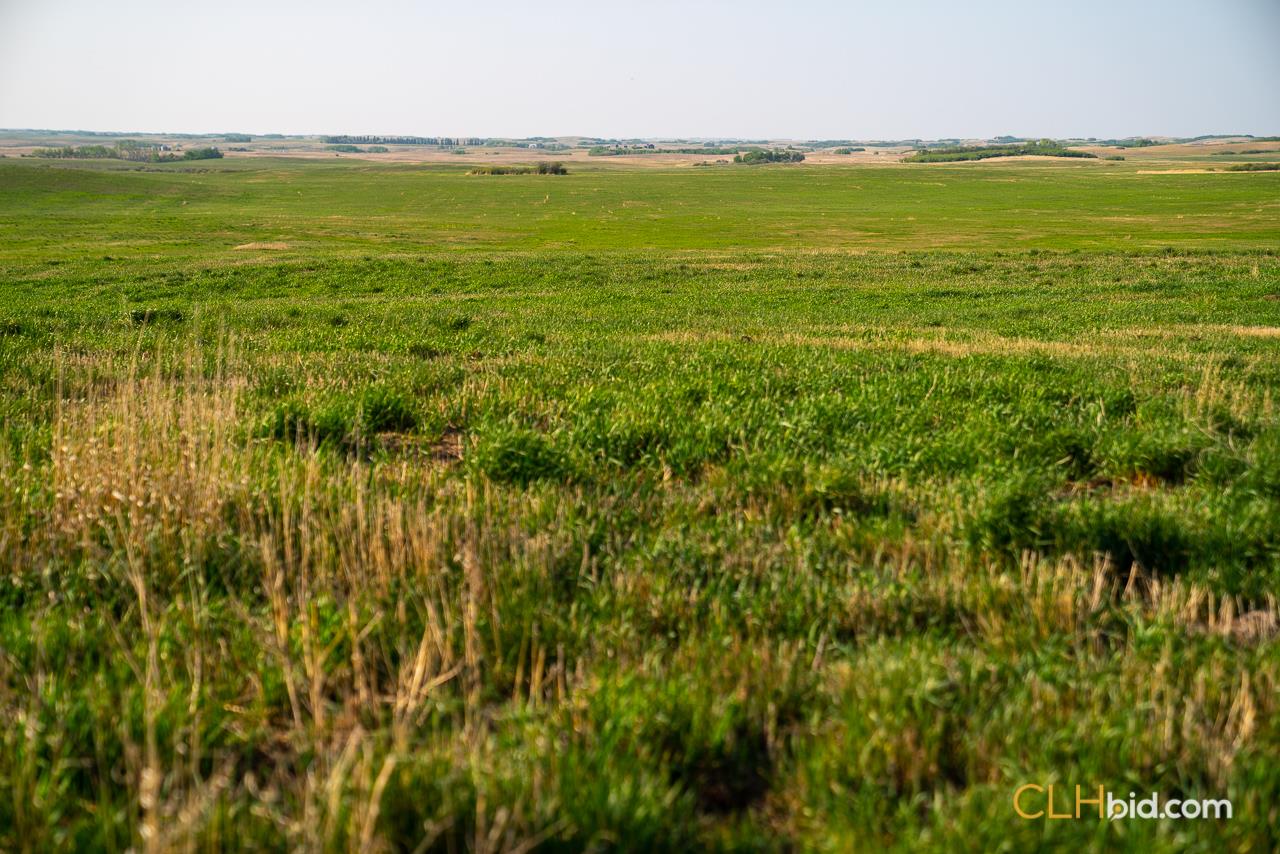 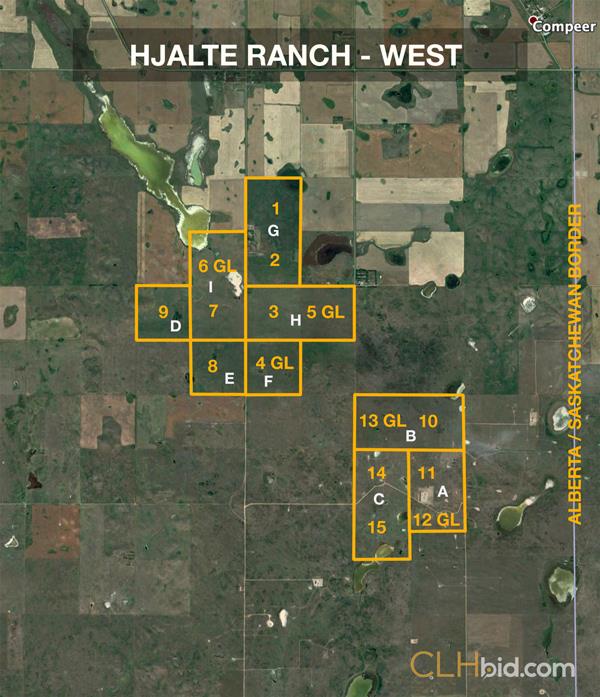 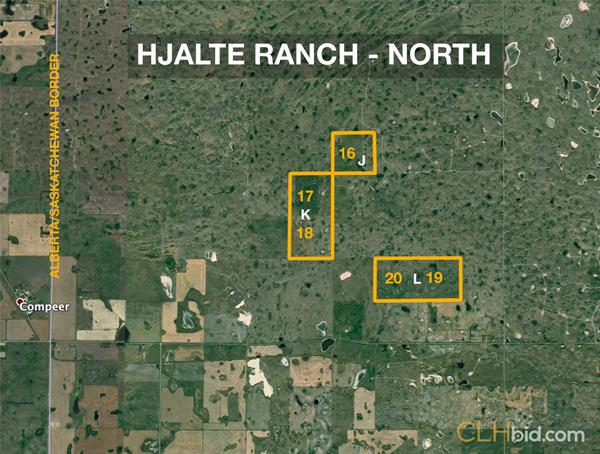 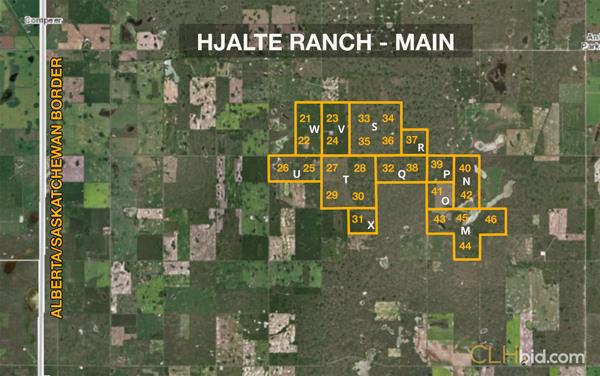 The Hjalte Ranch is a feel-good Western Canadian Heritage story.   Homesteaded over a century ago by Swedish immigrants, the ranch remains to this day owned and operated by 3rd and 4th generation family members.   The history of the Hjalte Ranch is a story of giving back, with each generation working on upgrading and adding to the ranch itself.  Over the decades the ranch has been transformed from a mixed farming operation to a cow/calf operation.  In large part, the transition related to absentee ownership, reducing labor needs and spring calving.  The ranch has approximately 2,800 arable acres that could immediately be returned to cultivation, all of which could be eligible for organic status. Too big for one province, the backbone of the Hjalte ranch is the Alberta / Saskatchewan border.   An old-fashioned overland cattle drive would see the cattle moved 8 miles from the West Ranch set up for winter feeding to the Main ranch in Saskatchewan set up for spring calving. 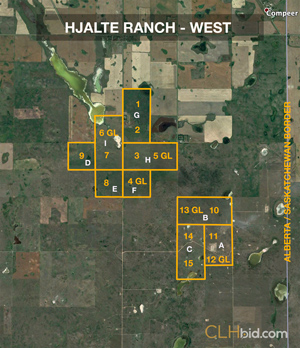 west ranch is the newer colt on the Hjalte Ranch.   This ranch adds big horsepower to the ranch itself with significant acres of arable land, a sizeable heavy duty cattle handling system all backed up with Surface Lease Revenue that would even make J.R. Ewing envious.  Parcel 1 & 2 will be sold as one Block and form the basis of the winter-feeding program for the World Class ranch.  The 1200 sq/ft residence is heated and, with modest work, could easily be an excellent residence for the hands-on operator of this part of the ranch.   The yard has a heated 32’ x 48’ shop c/w 14' high and 18' wide overhead door with electric openers on a concrete floor.  The homestead is serviced with natural gas.  The farmyard is well maintained with outbuildings that include a        30’ x 48’ machine shed, 32’ x 48’ Quonset and 24’ x 28’ two car garage.   The main corrals come complete with two large Goodon 32 ‘x 70’ metal clad cattle shelters.   Underground water services 3 Ritchie livestock waterers.  The permanent corrals look more like they were design built for bison as opposed to a cow-calf operation.  8" pipe for corner posts is standard.   An excellent water well, approximately 500’ deep, is located on the north side of the farmstead and services the home half.  The new hopper bin and portable panels do not go with the land; however, the hydraulic squeeze and fuel tanks will remain.

In total, the west ranch is made up of 10 deeded quarters and 4 ½ quarters of Grazing Lease. The majority of parcels 1 & 2 have been cropped at one time and could be again. Parcels 4, 5, 6, 13 and the north ½ of 12 are the Grazing lease quarters.  All Grazing lease quarters have dugouts except 12, which shares a dugout with Parcel 11.  With very few acres in native pasture, most of the hay land is a mix of alfalfa, crested wheatgrass and brome. Fences are in excellent shape with much of the perimeter fencing being four wire.   All quarters are individually fenced. The land has limited rocks and good percolation for crops such as canola and legumes. Most of Parcels 3, 7, 8 and 9 could be returned to cultivation if a buyer so desires.  One only has to look across the fence north of Parcel 9 or south of Parcel 8 to see what the land can yield for cereal, oilseed and pulse crops.

The southerly portion of the West Hjalte Ranch offers a return on investment well above that realized on commercial land in large cities.  In total, lease revenue approach $70,000 a year.   Using a cap rate close to current saving rates of 1.5%, the income stream from just surface lease revenue over the next two decades equates to a net present value exceeding one million dollars.  That is separate and apart from the value of all the farmland and improvements.  Seeing is believing – one has to drive the internal low profile roads on the southerly 5 and ½ quarter sections of the ranch to appreciate the grass potential, whether that be for hay or pasture.  All but the very most southerly portion of these 880 acres is highly productive, even on a moderately dry year. 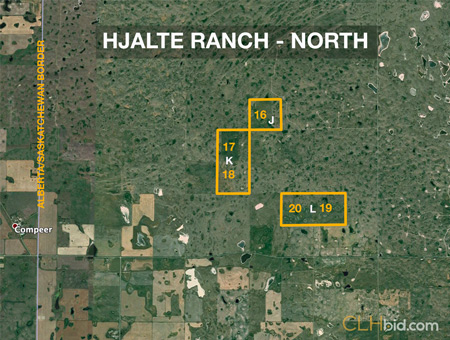 The North Hjalte Ranch land base is 800 acres in total. Be sure not to look at out-of-date aerials. Take the time to drive the newly redone Range Road past Parcel 17 & 18 to appreciate what this land is all about.   Parcel 16 is surrounded on three sides by a Wildlife Management Area.  A good portion of the quarter has been cultivated and is seeded down to tame hay.   More acres could be tilled and cultivated.  The quarter has ample water with the dugout and natural sloughs with good clean water.  Parcel 17 and 18 have significant Surface Lease revenue.   Much of Parcel 17 has also been cultivated and is currently seeded to hay.  Although the quarter has no dugout, some lows spots receive runoff that would be ideal for a dugout.   Parcels 19 and 20 to the southeast offer great potential for either livestock or the grain producer.  Parcel 20 has a dugout with much of the half section cultivated and now seeded down to hay.   Parcel 19 has a natural wet area for a good water source.  The north ranch land base offers a lot of options to potential buyers. 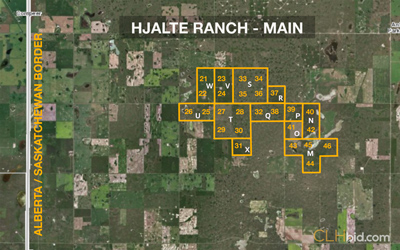 Swedish designed and Canadian built, the main ranch is over 100 years in the making, having been homesteaded in 1912.  An almost “unheard of” 26 quarter sections of contiguous land.  As you approach the Ranch from Highway 51 on the north, you pass the site of the historic hamlet of Court, Saskatchewan with a lone General Store still sitting high up on the hill to your right. You begin to sense that you will soon be arriving at a historic ranch as opposed to just another yard with corrals.  The entrance to the ranch itself could not be more inviting. Heading south for the last mile, you can enjoy the gently rolling landscape on both sides before breaking the crest of the hill and descending to an expansive view of the ranch itself.  Driving this last mile, you may notice cows on both sides of the road out on pasture, however, that look could easily be replaced with wheat, lentils or canola in bloom.   All of this land is highly fertile and has all been cultivated land in the past.  Parcels 23 & 24 have significant Surface Lease Revenue as a bonus.  The entire main ranch is a textbook location for future growth.  With many absentee owners or older farms in the RM of Antelope Park, the potential for assemblage and growth goes without saying.

As you turn onto the private lane into the main ranch yard, you suddenly sense the authentic character of this remarkable ranch.   The main house, made of concrete from foundation to the upper window sills, is symbolic of the ranch itself.  The home, in average shape, has recently had the windows replaced.   The house is heated with oil.  The main yard has a newer excellent large bore 100’ water well.  Underground power throughout the ranch yard provides new 100-amp service to four major outbuildings.  There is a second water well in the yard not currently being used.   Two 3,300 Westeel bins on concrete go with the yard.  Portable panels and hopper bins do not go with the land.  The elaborate handing system with squeeze located in the central handling shed stays with the land.   The design of the entire corral set up with four waterers is state of the art with wide alleyways to allow for the low-stress handling of animals with ease.  Outbuildings include a newer shop with 24’ wide shop door.  The home half, being parcel 25 & 26, will be sold as one Block.  Parcel 26 has a large dugout from which water is accessed for industrial usage offering ancillary income.   Immediately adjacent to the west of Parcel 26 is an RM commercial weigh scale offering significant advantages for reduced shrinkage when shipping animals off the ranch.  The scale could also be used for weighing grain or hay shipments off the ranch.  All arable acres have never seen fertilizer and have been seeded down to grass for twenty years.   Never overgrazed, the ranch land has had a significant rest and is ready to go to work.

The section immediately east of the main yard being Parcels 27 through 30 will be sold as one Block.  This section has a large dugout on the northwest quarter.  This section and all of the entire eastern portion of the ranch has access to a backup shallow summer 2” water line that can be fed from either the well on Parcel 25 or the spring-fed pond or dugout on Parcel 43.  Spurs off the main line are all 1.5” in diameter.  The various dugouts on the ranch offer numerous options for buyers to pump water and that means water is never an issue.   Parcel 31 is, again, a grain farmer’s dream, being wide open with the bulk of the quarter having been under cultivation.  Parcels 33 through 36 will also be sold as one Block.   These four quarters have a large dugout in the southwest and the underground water line fed from Parcel 25 or Parcel 43.  A line could be plumbed into the dugout as well.  Parcel 37 is comprised of tame hay and native pasture.

Parcel 32 and 38 will be sold together.  The dugout is located on Parcel 38.  This land is native pasture again with a backup water line running through Parcel 38.  Parcel 39 is a mix of native grassland and tame hay with a dugout in the SW corner.  The Parcel has some aggregate on the easterly side; however formal testing has not been carried out.  Testing will be permitted upon request by potential bidders.  Parcel 40 on the north-east corner of the ranch is a superb quarter with the bulk of the quarter made up of arable land.   Parcel 41 is one of the nicest quarters on the eastern portion of the ranch. The bulk of the quarter has been under cultivation and is now seeded down to grass.  Parcel 42 could be all brought under cultivation to the north of the wasteland.

Parcel 43 has a dugout and a mix of arable and native land.  The quarter has a tiny section of wasteland that is for the most part foreign to the entire ranch. The bulk of Parcel 45 and approximately half of Parcel 46 have been under cultivation in the past.  Parcel 44 on the south edge of the ranch is sure to capture the interest of any grain farmer.  The bulk of the quarter has been cultivated and cropped over the years.

The Hjalte Ranch will be offered for sale by way of electronic tender by CLHbid.com.  The tendering will commence with tendering of specific parcels of land and then, at the conclusion, prior successful bidders will be allowed to bid ‘en bloc’.  See below for details on the En Bloc parcels and how to qualify. Check the CLHbid.com website from time to time for updates.

NOTE:  On sale day, names of bidders are never displayed, rather only the bid amount.   Following the sale CLHbid.com keeps all unsuccessful bidders names in confidence and doesn’t disclose those names, even to the seller.   We also never post the high bidders name on our site.  We respect a bidders right to do business in private.

Given the number of parcels for tender, it should be noted the first parcels sell very early on August 1st.   Bidders are encouraged to place bids on the evening of July 31st.   Please make note of the time that each respective parcel expires for tendering.